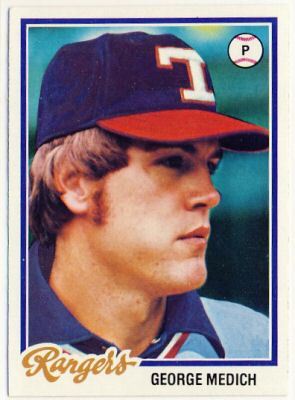 The word "heroes" has taken on additional and perhaps even more bewildering meaning because of the popularity of a first-season television show featuring that very name. For a much longer time, the word "heroes" has been attached to figures from the sports world, often with results no less confusing or ambiguous.

For the most part, baseball players are not heroes. (They shouldn’t be role models either, but they nonetheless are, given the widespread influence they have on the younger set.) The truly heroic figures in American society are the underpaid teachers, the studious doctors, the honest police officers, and the selfless members of the military. Yet, in some cases, baseball players can truly double as heroes. In 1978, a handsome veteran pitcher named George Medich earned that distinction.

Coming up as a rookie with the New York Yankees in 1972, Medich went on to post a solid career as a starting pitcher. Medich’s career began encouragingly with the Yankees, but his years in Pinstripes coincided with the team’s final few failures before the eventual pennant glory of 1976. (Still, Medich did contribute to that level of success indirectly, as the principal trade bait sent to the Pittsburgh Pirates for a second baseman named Willie Randolph.) A solid No. 3 starter, Medich went on to win 124 games for the Yankees, Pirates, Texas Rangers, Oakland A’s, Seattle Mariners, New York Mets, and Milwaukee Brewers. As if the travels and demands of a typically lengthy major league season didn’t sap enough of his time, Medich taxed himself further by attending medical school, eventually earning his degree from the University of Pittsburgh. While all of his Topps cards list him as George Medich, his procession through the rigors of medical school prompted most baseball people to refer to him as Doc Medich.

Although the travails of the long baseball season forced Medich to subvert some of his healing passions, he did put his medical training to good use under the most dire of circumstances. During a 1976 game between the Pirates and Philadelphia Phillies, Medich made his way into the stands at Veterans Stadium to perform CPR on a 74-year-old man who had suffered a heart attack. While awaiting the arrival of an ambulance, Medich performed mouth-to-mouth resuscitation. Medich’s efforts notwithstanding, the elderly man died later in the day.

Two years later, Medich’s heroic ventures paid off far more tangibly. On July 17, 1978, another man suffered a heart attack during a game at Memorial Stadium between Medich’s Rangers and the hometown Baltimore Orioles. Medich once again rushed into the stands and performed CPR on the 61-year-old victim. An emergency medical services team soon arrived and rushed the man to a local hospital, where he received further treatment. This man recovered from the heart attack, surviving to live several more years. He likely would not have enjoyed those "extra" years if not for the quick and effective reactions of a right-hander/doctor named George "Doc" Medich.

After his pitching days, Medich became a successful orthopedic surgeon. He eventually opened up an orthopedic clinic in Beaver, Pennsylvania. Unfortunately, his story did not end up happily ever after, at least not in the way that we expect it will with Hayden Panettiere. In a shocking post-baseball development, the onetime medical hero eventually ran intro trouble with the law. In 2001, the 53-year-old Medich was found guilty of illegally possessing painkillers and sentenced to nine years probation. Pleading guilty to 12 counts of possession of a controlled substance, Medich had written a dozen false prescriptions in the names of his patients so that he could obtain painkillers for himself. Explaining that Medich had struggled with drug addiction for years, his lawyer called his crime a "cry for help."

Sadly, even our truly legitimate sports heroes have their blemishes.

Bruce Markusen is the author of the award-winning A Baseball Dynasty: Charlie Finley's Swingin' A's and the writer of MLB.com's Cooperstown Confidential, found at www.bruce.mlblogs.com. Bruce, his wife Sue, and their daughter Madeline reside in Cooperstown, NY, a stone's throw from the National Baseball Hall of Fame and Museum.

Comments
1.   JoeInRI
I remember Medich well, NYC's first pitching 'Doc', especially his terrific '74 season when he and the late Pat Dobson won each won 19 games and the Yanks lost the division the last week of the season. I did NOT know how his story turned out. Nice story, Bruce. The best of heroes are human. As are we all.

2.   Sliced Bread
Thanks for a great story, very well told, Bruce.
I did not know about Doc Medich's drug problem.
The guy's a three-act baseball TV movie if there ever was one, but his story tracks more like an episode of "House" than "Heroes."
Rick Schroder could play him.

3.   rbj
I don't know if it's true, but I have heard that there is a higher rate of addiction amonst medical professionals, due to easier availability.

4.   OldYanksFan
Great Bruce... as Bob Hope would say "Thanks for the Memories". I remember the Doc, but not his 2 forays into the stands.

I can not think of anything cooler then a starting pitcher of a baseball game running off the mound, into the stands, and saving a fans life. How cool is that? Indeed, there was a doctor in the house. We can only assume the Rangers gained one fan that day.

One a serious note, is it not sad that a hero, a doctor, a man committed to helping others is considered a criminal in this country because of a drug addiction?

5.   OldYanksFan
"Jaret Wright is back on the 15-day disabled list with a shoulder injury, although the right-hander and the Baltimore Orioles insist this trip won't be a long one."

6.   Count Zero
Huh! I remember Medich as well, but I didn't know anything about his second career, his exploits in the stands or his drug problem. Very interesting read...thanks, George!

7.   Josh Wilker
Great essay on the Doc, Bruce. I didn't know about his fan rescues. (To me he's always been a member--along with Dock Ellis--of the most disparate of the "confused twosomes" from my childhhod: http://tinyurl.com/28892n. The rescues also made me think of one of the biggest heroes of my childhood, Jim Rice, who in 1982 leapt into the stands to come to the aid of a young boy who had been struck by a foul ball and was gushing blood from the head (http://tinyurl.com/27xn2z).

8.   Bruce Markusen
Thanks for the nice words, guys.

Medich was not only a workhorse for the Yankees on the mound in the early seventies (piling up large innings totals), but a workhorse in the stands in the late seventies. It's too bad there's no video available of Medich making his memorable forays into the seats on those two occasions.

Josh, I enjoy reading your essays on baseball cards. We have something in common--a love of cards, especially during the era ofthe 1970s.

9.   jkay
Nice job. Somehow this made me think of the pharmacological adventures of Doc Ellis.

There was an episode of House about a baseball player named Hank Wiggum (Bang the Drum Slowly, anyone?)

11.   AbbyNormal821
See? This is what I F***NG love about this log - Every day...every single day, I'm learning more and more about baseball - the history, the stories (even the forgotten ones).

12.   Cliff Corcoran
I was always stupified by the fact that a guy named "Medich" would pick up the "Doc" nickname but have it have nothing at all to do with his last name being freaking Medich. That's one reason why I was prone to confuse Medich and Ellis as a kid. It was always more logical to me that the guy named Ellis was the actual doctor and the guy named Medich got his nickname because of his surname.

13.   rbj
And Doc Ellis claims to have once pitched a no hitter (with 8 walks)while on LSD.

Something about Docs and drugs.

14.   Max Nomad
5 Yea, ANYBODY, even Igawa, is an upgrade over Wright. The rotation, for all it's concerns, is definitely better this year, and the subs (Karstens, Hughes, et al) are better too.

15.   Max Nomad
14 And that's not to say Igawa is bad, just that nobody thinks he'll be good. Especially if they keep comparing him to DM. Ridiculous.

16.   Max Nomad
Also, anyone know that A-Rod has tied the AL record for consecutive games with an extra-base hit? 11 and counting...

18.   Bruce Markusen
As someone who saw both Ellis and Medich pitch, I never did confuse the two--largely because one is white and one is black. They also had two completely different body types. But if you didn't actually see them pitch, or didn't know them from photographs, I would see where it would become confusing. I get confused with the two Sam Jones from an earlier era. Again, If I had seen them pitch, I doubt I'd have any problem.

Another way to separate the two: Medich was called "Doc" (a nickname), whereas Ellis was known by the different spelling of "Dock" (his given name). I always liked the name Dock. That seems like a pretty cool name to be given by your parents.

19.   pinkfloyd
Didn't Doc and Fritz Peterson swap families back in the swingin' 70s?