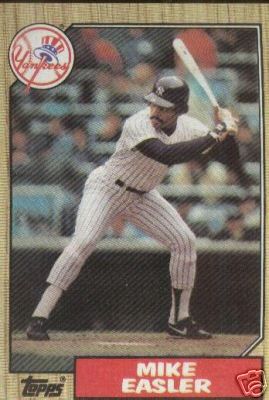 As a child of the 1970s, I've always loved wood paneling in a home. I even appreciate the cheap, cardboard-thin wood that lined the basements of many houses in the northeast corridor during the seventies. Given my affection for wood paneling, it's not surprising that Topps' 1987 wood-bordered set ranks as my favorite of the 1980s.

With the wood border providing an ideal framework, Mike Easler's card rates near the top of my list. This card, No. 135 in the set, gives us a clear view of Easler's memorable batting stance. Unlike most power hitters, Easler batted out of a pronounced crouch, a pose usually preferred by singles and doubles hitters the ilk of Pete Rose. After attacking a pitcher's offering with a fierce uppercut, Easler finished off each swing with his signature flourish—an exaggerated rotation of the bat, the equivalent of a helicopter motion. Even as a college student in the 1980s, I used to mimic the Easler "helicopter" during meetings with fellow baseball diehards. No one of Easler's era finished his swing in such a way, and no one since has matched Easler's twirling of the bat.

In addition to his distinctive batting style, Easler also had a descriptive nickname. Although most Yankee fans remember Don Mattingly as "The Hit Man," he was not the first to acquire the nickname. Easler preceded Mattingly as the original Hit Man, a testament to his aggressive style at the plate and his ability to pepper line drives from one outfield gap to another. Unlike most left-handed hitters with power, Easler boasted a particularly effective opposite-field stroke, which he seemed to prefer over pulling the ball to right field. Easler was usually at his best hitting the ball with gusto toward left-center, an ability that he honed during his years at Fenway Park. Easler became particularly adept at hitting "The Wall" at Fenway, an advantage that he would lose during his two stints with the Yankees. Unfortunately, left field at Yankee Stadium has never provided a reachable target for left-handed hitters, and that did not change for The Hit Man, who struggled to fill the shoes of the player for whom he was traded, Don Baylor.

Still, Easler was reasonably productive in his first go-round in Yankee pinstripes. He played well as a platoon DH and left fielder, sustaining a role that he had filled with the Boston Red Sox. Prior to that, Easler had forged a niche as a highly successful part-time player with the Pittsburgh Pirates, which included a cameo during the team's World Championship season in 1979. That Easler sustained a lasting major league career of consequence throughout the 1980s is testament to his perseverance. For most of the 1970s, Easler bided his time in the minor leagues, save for unproductive cups of coffee with the Houston Astros and California Angels. Along the way, he won two minor league batting titles. Yet, major league scouts didn't like Easler; they viewed him as nothing more than a platoon player, incapable of hitting left-handed pitching, and regarded him as a butcher in the outfield. They didn't feel he hit with enough power or possessed enough speed. Even as Easler filleted minor pitching at Double-A and Triple-A, scouts dismissed him as nothing more than a career minor leaguer.

Most players would have been excused for taking their minor league numbers to Japan for a bigger payday, but Easler remained adamant about a career in the major leagues. Easler's persistence started to deliver dividends in 1977, when the Pirates first brought him to Pittsburgh. By 1979, he appeared capable of contributing in a small role to a World Championship club. By 1980, he had convinced everyone that he belonged in the major leagues for the long haul.

Easler also helped his cause by becoming popular in the clubhouse. Teammates liked him, as did the media. Easler always answered questions from the press after games, regardless of the outcome. Even the most jaded Red Sox reporter, weary from having to deal with "unfriendlies" like Jim Rice and Wade Boggs in an exceedingly difficult clubhouse, could find solace at Easler's locker. Easler would always talk—no matter what.

Given his sociability, his relentless determination, and his resplendent hitting style, it's easy to see why Easler became one of my favorites during the 1980s. His 1987 Topps card might not be worth much—it's a common card from an era in which too many cards were produced to begin with—but it's still a nice one to have.

Comments
1.   Ken Arneson
Wood paneling really creeps me out. I don't know why. Maybe I had some childhood trauma in a wood-paneled room that I can't remember or something. When we bought our house, several rooms were covered in wood paneling. First thing I did was rip it all out.

My 6-year-old daughter, took one look at this card and blurted out this:

I think I somehow passed on my mental anxiety about wood paneling to her. Maybe it's a genetic susceptibility towards wood panel anxiety, just looking at it makes you freak out. Very disconcerting.

2.   Alex Belth
Wood-paneling reminds me of growing up too. We didn't have it in my house. I don't really feel warmly towards it, but am more neutral than creeped-out. Ken, that's a hilarious reaction from your daughter. Tell her not only are pinstripes slimming, but they make you Ginormous too (just ask G'bombee).

3.   wsporter
1 I once had a girlfriend who I came to realize , after some fairly good times, was a true psycho (I no doubt drove her to it). Her apartment was done in wood paneling through out. To put it mildly things ended badly. So badly that, as I was leaving on that memorable last visit, she threw the remaining scraps of the paneling that had been left by the landlord in the apartment out the window at me. One sailed through the air frisbee like and wedged itself in the passenger side window of my VW bug. I made a clean getaway, relatively unscathed, yet almost 30 years later I have never been able to feel less than incredibly uncomfortable in the presence of wood paneling. I am so with you on this Ken.

4.   Knuckles
Kramer: Wood, Jerry. I'm gonna do my entire apartment in wood paneling. It'll be like a ski lodge.

My cousins (2 boys, my own age) lived in the attic/upstairs of their house, that their dad had finished in wood panels floor to ceiling. He built out from the eaves to allow for closets and shalves and stuff, so there were these weird secret passages all over the place (it was a deep bedroom, being one of those narrow crackerbox houses that just seem to go back for miles). Since we were all hopped up on A-Team, Knight Rider, Miami Vice, those passageways became natural inclusions in our constant cops 'n drug dealers games.

The '87 Topps set was the first one I got as a full boxed set, that Christmas, beginning a string of maybe 8 or 9 years.
I can still remember the Mattingly one- he had long sleeves and maybe a turtleneck on, and the tone of the photo just looks like one of those raw cold April/September games- very similar to this Easler card. They probably took all of the Yanks '87 snaps on the same day in '86.

Nowadays, you could probably panel an entire attic w/ '87 Topps cheaper than buying the panels themselves...

Incidentally, could Easler have possibly gotten a tighter uniform? SHEESH! At least he showed the stirrups, which I'm a fan of.

10.   Bama Yankee
As you can tell, I liked this set also (I also grew up in a house full of paneling).

This was one of my favorites:
http://www.flapa.com/baseball/cards/KevinMitchell1987_653.jpg

This was not (I always hated when they did this to cards):
http://www.neatcards.com/images/PrettyInPink.jpg

12.   Jim Dean
What a great memory! That was my favorite set, by far. I think it must have been when my collecting started in earnest. So the 87 set represents all my virgin love (of wood paneling). The 84 through 86 sets always seemed much older, and more refined. But I think by 87 it was becoming clear, for me, who was worth collecting. It probably didn't hurt that birthday parties then would mean a box or three plus a subscription to Baseball Digest.

BTW: Notice all the empty seats down low. The stadium looks half full. Wow, those were the days for good views. Now the seat Nazis are pretty tight if you don't get down there early.

He is not skinny!

14.   Bama Yankee
11 Good eye Cliff. I noticed that too (those minis were not a bad set, either). I only included it because it had the wood paneling look and because it was Donnie B.

16.   Bruce Markusen
Wow, I had no idea that folks had such strong feelings on both sides of the wood paneling issue! Hey, I like the wood paneling, but it wouldn't kill me to take it out of the house either.

Good observations on the tightness of Easler's uniform and the showing of the stirrups. Personally, I don't care for how the players wear their pants down to their shoes in today's game. They look like pajamas. Isn't there a happy medium where they could show some of the stirrup?

17.   Raf
16 Come to think of it, does anyone wear stirrups anymore? With stirrup socks, and uniform color socks, I don't think anyone wears them.

I haven't worn stirrups since JV baseball back in 91

Crap, now I'm dating myself; but I was always partial to the '83 Topps set and had a special affinity for the '83 traded edition, which included Strawberry's rookie card. Many, many tempting trade offers for that Straw card were summarily rebuffed, let me tell ya. Of course, now it's worth about three cents.

19.   joejoejoe
Easler had a nice career. He played for some high profile teams.

Pirates - The last of the star-powered Pirates who combined disco, Dave Parker, Willie Stargell, and a few well known hold-overs from the Roberto Clemente-era in one very entertaining package.

With all the starts that Easler played with you never felt like there was a let down with him coming up to the plate. It was always 'this guy can hit' - at least in my mind.

20.   Raf
One of the few times the Yanks & Sox traded with each other. Has there been any deals between them since the Stanley trade?

21.   The Mick 536
Looked up the nicknames in the 2004 Baseball reference. Mattingly-"Donny Baseball." Easler doesn't have one.