I was at the game today (Emma will be along later with the recap), and the Yankees were giving away DVDs of a "Virtual Tour" of the new Yankee Stadium. I haven't watched the thing yet, but opening up the front flap I saw this: 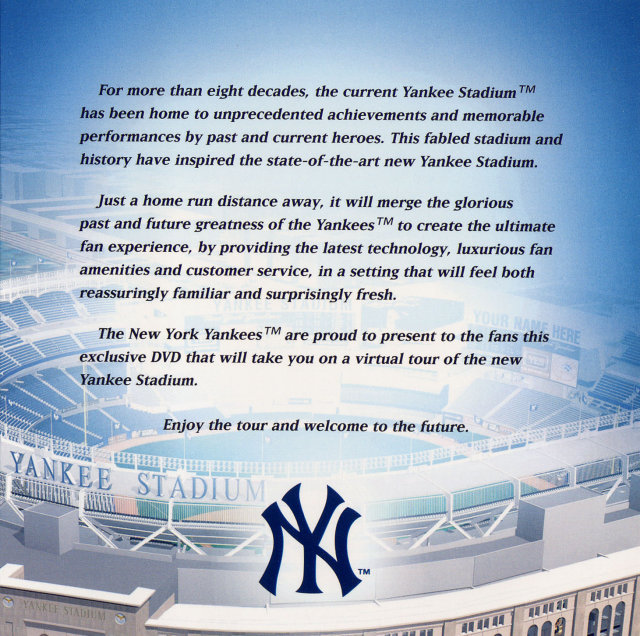 If nothing strikes you as odd about that, look a little closer: 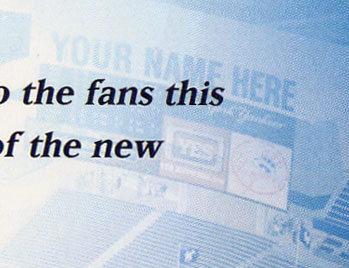 I'm speculating wildly here, but that image in the background looks a lot like a mock-up designed for companies interested in acquiring naming rights to the new Stadium. I've not seen any other conceptual image of the new Stadium with any letters to the right of the center field video screen, so I'm guessing whomever layed out this DVD package is in a boat load of trouble right now.

Update: I watched the DVD and, again, there is no lettering to the right of the video screen in any image shown.

Comments
1.   Sonya Hennys Tutu
Quite the contrary. They'd be in big trouble if they'd given free advertising to an existing (or otherwise 'real') advertiser who had not paid for that space in the new stadium.

Sorry, nothing to see here. Move along.

2.   Cliff Corcoran
1 I think you're missing the point. The point is that they have giant, permanent lettering equal in size and style to "Yankee Stadium" on the left of the scoreboard that is clearly intended for advertising. That looks like more than an ad, it looks like part of the name of the new Stadium.

3.   Cliff Corcoran
2 Looking at the images above again, I see how you missed it. The "Yankee Stadium" lettering to the left of the video screen is almost too faint to see in the top image, but it's already been installed and appears in all other conceptual images I've seen. The lettering to the right of the video screen I show in close-up matches it in size and style, thus my concern.

4.   Just fair
They look about the size of the big ol' Marlboro letters that used to be in the current stadium. I recall them still being visible even after they stopped advertising smokes. They just were no longer flaming red. "Yankee Stadium of Flavor Country."

5.   Shaun P
With all the complaints over the increase in ticket prices, if they sell naming rights to the place, I think they might have a wee bit of trouble.

Anyone more familiar with graphics software than me - is it possible this was just a mistake and the "YOUR NAME HERE" was default text to be replaced later, except someone forgot to do that?

6.   RichB
5 That's probably exactly what happened. With a keystroke you can remove that text from the image. It is probably intended to be a placeholder, which would be replaced with something real later on. But, no image software would put that in by itself, someone chose that location, font, size and phrasing. So, I imagine that Cliff's supposition is correct - the choice of "your name here" probably means that this image was created for materials sent to corporations interested in naming rights.

But, I'm surprised that everyone is surprised. The Mets sold naming rights to Citi for $20 million per year. The Yanks will probably get $30 million. If you were a business owner, would you turn down that kind of dough?

7.   Start Spreading the News
Hey! I was at the game today and I didn't get a DVD! Dang it!

8.   Start Spreading the News
BTW, the Yanks have only 7 games left against teams under .500. The other 22 games are against the D-Rays, Boston, Toronto, Angels and White Sox.

If I were handicapping the wildcard race, I would have to give the edge to WhiteSox or Minnesota over Boston. Those guys get play the Royals. The AL East division patsies aren't that bad. And Boston still has a few games against the DRays, BlueJays and Yanks who are all stronger than Cleveland and Detroit

9.   Cliff Corcoran
7 You're missing a nauseating experience. Most of it is aimed at the high-end luxury customers. That "Your Name Here" should read "Bentley" or "Sesna" given the contents of this DVD.

10.   Jen
I remember them saying that they would not sell naming rights for the actual stadium, but they would probably sell rights for differents parts of it (like the Great Hall, or the entrances) I watched the DVD though and it does look weird with that open space to the right of the video screen. It doesn't balance out with the "Yankee Stadium" on the left. Of course if they want to use that space to sell naming rights to the bleachers in order to keep my tickets at $12, well, then go for it.

What I'm interested in though is the mention of the sports bar in center field and that the bleachers have access to it. Does that mean that beer is coming back to the bleachers or will you have to be in the bar to drink it?