End of Innocence
by Alex Belth 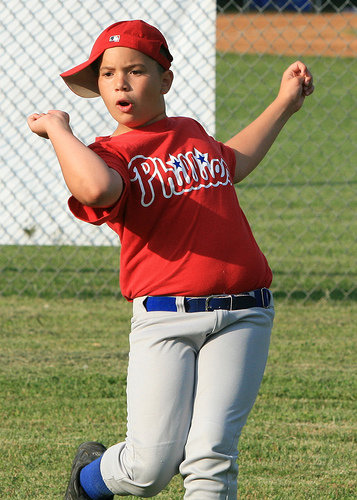 I don't know about you guys but I find ESPN's wall-to-wall coverage of the Little League World Series to be more than somewhat disturbing.  I'm generally not a moralist by nature but I'm just so turned off by watching kids televised as if they were professionals.  It doesn't seem right to me, it feels like too much pressure is being placed on them too soon.  How can they just kick back and have fun?

This year, the coverage is more pronounced than ever as highlights make their make nightly onto Sportscenter and Baseball Tonight.  I simply turn the channel.  I just won't watch it.

Anyone else have any thoughts on this?

2.   pistolpete
Yeah, the minute I heard about 12-year olds throwing curveballs & changeups, it was over for me.

Kids grow up way too fast these days.

3.   monkeypants
Haven't watched the little league world series in years, and probably never will again. Encapsules so many things I do not like about sports:

1. Intense pressure put on kids as if they were pros
2. Fences were brought in (in the '90s?) for more HRs and offense. Great message there.
3. Announcers saying stupid things about how this or that 10 year old needs to work on his curve ball.
4. Glorifying insane coach-dads.
5. 19th century nationalism played out with children. Frankly, I hate "national" sports in general. Do I really need to national chauvinism in sports? Do I want to see Bernie suit up for Puerto Rico? Sports can be a great tool for integration, so we instead use to highlight division and potentially conflict. And with kids too.
6. If you lose Bobby, you fail America. See #5 and #1 above.
7. Announcers unwittingly saying stupid and bigoted things, like how "disciplined" or "organized" the Japanese team is, but how the American team loves to have fun.
8. Seemingly endemic cheating and lying about age.

Forget it. When I want to watch little league, I just go down the block and take a look at the neighborhood kids playing.

4.   Shaun P
I don't watch Baseball Tonight or SportsCenter anymore, so I didn't know, but I am not surprised. ESPN does over-coverage so very well (Brett Favre).

On the one hand, I think its great that the kids' extended family and friends can see them play on TV. OTOH, highlights seem to be a bit much, especially because I'm sure ESPN jazzes them up. Let the kids have fun and not worry about making the highlight reels.

5.   Ken Arneson
Oh, phooey, y'all. These aren't five-year-olds, they're twelve year olds. As the father of an 11-year-old and the uncle of a just-turned 13-year-old, I'd say they're at exactly the age where they need to be taught how the real world works, how you handle pressure and failure. They've been coddled long enough.

My nephew played in the Little League tournament this year. They made it through two district tournaments, and were one win away from making the regional tournament to qualify for Williamsport. They lost by one run in the final game, when the second base umpire failed to see the tag on what should have been an inning-ending 4-3 double play, because he was watching the run score at home plate instead of the play right in front of him. It was a heartbreaking way to lose.

Get a ball, a bat, nine gloves and tell the kids to go find a field and play. No adults around.

8.   JL25and3
2 I don't have a problem with kids throwing changeups. Curveballs, yes.

9.   Sliced Bread
I thought I'd stumbled on the Little League World Series the other day, but it was just a Pedroia highlight.

My neighbor's 7 year old son complains his Little League performance has been hampered by the clubhouse ban on Brownies.

Hopefully the 2008 Little League World Series MVP has the good sense to stay away from drugs... and Madonna.

10.   Just fair
I love the LLWS. What I cannot stand is the 12 year old chestbumps and whatever else look at me nonsense they are trying to emulate. I just feel old b.c all that crap drives me nuts. I know the kids are excited and all after a key homerun or diving catch, but c'mon. Is media to blame or is it a sign of the times or both?
I'm sure the little leaugers were just as excited to win decades ago, but they were not shown in prime time. Heck, when I was a kid, I literally thought people in the old days actually lived in black and white.
The MTV generation kicked me in the head during the men's gymnastics just last week. Most of the U.S. gymnasts couldn't get enough of rambling nonsense into the cameras. Sorry for the long rant, But it fires me up, ya' know.

11.   Raf
5 They lost by one run in the final game, when the second base umpire failed to see the tag on what should have been an inning-ending 4-3 double play, because he was watching the run score at home plate instead of the play right in front of him. It was a heartbreaking way to lose.

Something similar happened during my cousin's (who's on a traveling team) game, the umpire missed the tag on what was to be the winning run. Batter supposedly tagged the runner, and threw to first to complete the double play, but since the ump didn't see the tag, the winning run scored.

Seeing this happen @ other levels of baseball, recreation & otherwise, I wish umpires would be more clear and decisive with their calls. It would eliminate a lot of confusion.

Of course, had a player not been called out for "unsportsmanlike conduct," (3-run homer negated because of a helmet flip), they probably would not be in that position.

13.   Shaun P
12 In the "middle" of Massachusetts, around Worcester mostly, there are pockets of Yankee fans - all folks of Italian descent who's parents/grandparents/great-grandparents were Yankee fans because of, as one of them put it to me, "the great DiMaggio." It tends to be older folk though, because many of the "younger generation" were turned, if you will, by 1967.

National pride in sports doesn't bother me, except when its throw in someone's face.

14.   Alan The 45 Guy
Any reason that the Saudi Arabian team has to have it's hair dyed blonde? Just a thought

15.   monkeypants
12 Its one thing to take in a player--the Italians can take pride in DiMaggio no matter what team he plays for. I think such tribalism is bothersome at best, downright dangerous at worst.

Yet in any case, that is very different from going out of our way to configure teams around ethnic or national identities. Would you say it was ok to have a little league WS organized by race: "yay, the blacks beat the whites!" "Boo! I hate the yellow kids."

Organizing by nation, and imposing 19th century nationalist values is little better. These events end up being opportunities for conflict and division, or for international hostilities to play out in the world of sport (sometimes involving children), and can see basically no good coming from that.

You like nationalist sports? Check out the 1936 Olympics. That's the path it leads to.

16.   Schteeve
Yeah, I don't watch the National League either.

Yeah, Jesse Owens was allowed to sit in the front of the bus, to drink from the "good" water fountain, to eat at whatever lunch counter he desired...

Did I miss something, have there been any charges of racial superiority @ the LLWS? @ the Olympics?

It's the Little League WORLD series, do you have any better ideas as to how they should assemble a team other than by country?

18.   DarrenF
1 Could not agree more. For me, the derision extends to the Olympics. Not that the LL kids are to blame, of course ... it's just the insistence on pounding the pristine out of the experience.

21.   ken225
The hype over the LLWS is bordering on child pornography at worst, exploitation at best.

The increased coverage is driven by ESPN's ratings at all costs mentality and the self aggrandizement of the LL organization.

22.   Brewer Bertram
You mean you aren't concerned about who the second baseman of Indiana's team's favorite actor is?

23.   monkeypants
17 The 1936 Olympics were an opportunity for a hypernationalist ideology to use sports as a platform. Such ugly national politics have intruded on just about every Olympics there have been, certainly every version that has been held in my life. The modern Olympics, started in 1896, are part and parcel a creation of 19th century nationalism.

To replicate the often toxic sport-as-competition-between-nations at the little league level is appalling, in my opinion.

24.   Raf
23 Yes, and Jesse Owens took the idea of a "master race" and stood it on its head. Then came back to the states and was a second class citizen.

Still doesn't answer my question about assembling teams for the LLWS, if you don't want to do it by country.

25.   monkeypants
24 I probably wouldn't have a little league WS to begin with, because I'm not sure we need to crown 12 year olds champions of the world. In any case, I would never seed them in brackets by country or continent. Maybe a random seeding?

26.   monkeypants
24 The fact that Jesse Owens showed the Nazi's what for doesn't make the stage any less distasteful.