Hang Time
by Alex Belth
Is there anything more New York than the sight of kicks hanging from a wire? 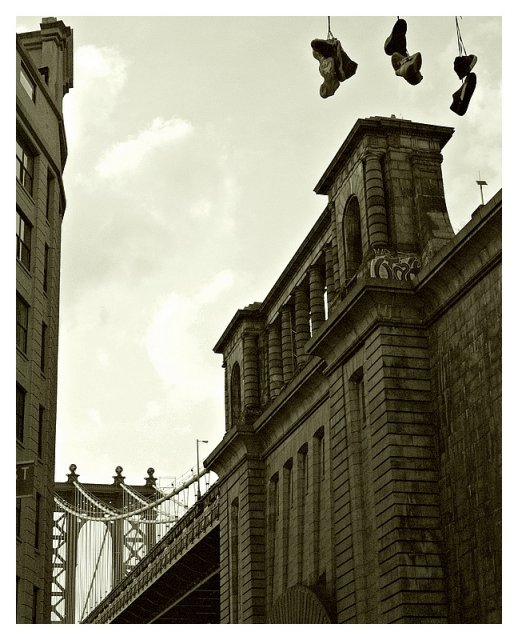 Comments
1.   Joeg
Had an odd thought last night, or an odd question rather:

Would it be more effect to use the twelve pitchers as two-innings per appearance specialits? That is, no starters, no LOOGYs, no closers, every one pitches two innings and then takes twenty-two innings off.

There were a lot of thoughts swirling in my brain when that question popped up. In general, it's the debate on whether closers are special and hard to find or are they readily created when the need arises. Mo is a failed starter, yet he's assured of a plaque in Cooperstown. Many teams seem able to replace an effective closer with just as effective a closer. Most pitchers seem to find it easier to come in for an inning or two of work than try to pitch six or seven innings. Joba didn't need to "work up" to coming in from the bullpen.

It would no doubt be more cost effective. You wouldn't be paying premium starter or premium closer salaries. Your value to the team would be ERA and WHIP, not wins or saves. Everyone would pitch about 120 innings per year.

I think the idea has merit, but I'm not a baseall guy, just a Yankees fan.

Feel free to pile on and ridicule the idea, no pride at stake here. Once the idea formed in my head, I became more and more attached to it.

In my view, if you pitch only the last inning of a game, you'd start the next one with an inning of work. The "starter" would never earn the win. Saves would be more or less spread throughout the staff.

You'd need "business rules" so that if a pitcher was getting bombed, you'd pull him early.

If you reject the "two inning" rule, maybe you'd have three "packages" of four pitchers each that you'd roll out every third game. You'd have three starters, six middle guys, and three closers. Advantage here is you can adjust the workload to accomodate hot streaks or fatigue.

I apologize if this idea has been debated to death at another site. It just came to me yesterday.

I think the main problem in managing is identifying those situations that are most important. Personally, I think a tie game is more important than a 3 run lead. The best managers use their relievers in the order of importance. It seems like there would be a simple algorithm which would tell you who to pitch when.

I think managers have the most trouble determining who to pitch when it is tied. They often go to the back of their bullpen rather than their strong relievers(See Torre, Joe @ 10/2003)

3.   Shaun P
2 The amazing thing is that (most) managers once understood how to do that, and did it. Now, few (if any) manage their bullpens that way.

For all the advance there has been in the understanding of baseball over the last 30+ years, there's certainly been some knowledge lost along the way.

4.   ieddyi
LaRussa actually tries something similar with Oakland in the early 90's.

5.   JL25and3
3 It's the only instance I can think of where managerial strategy is dictated by an individual statistic rather than by the needs of the team.

6.   Dimelo
The other thing about great "old tyme", "old skool" - whatever description you want to use for them - managers IS that they exist only as commenter's in blogs rather than as managers in baseball dugouts.

It really is an interesting phenomenon, I think we need a new stat called Value of Commenter as a Big League Manager if Current Manager was Replaced - VCBLMCMR.

If Billy Martin were manager today, a lot of people would still bitch about his bullpen management, lineups, platoons, etc.

7.   JL25and3
6 No, they'd bitch about how his cavalier destruction of starting pitchers. And they'd be right.

8.   rbj
So what's the deal with hanging sneakers from telephone wires? You do it to someone you hate or what?

9.   Raf
8 No not really. Just something you do, or at least I did. Take an old pair of kicks you ain't using, tie the laces together, and throw 'em up there.

FWIW, I saw kicks hanging from a wire in Boston last wknd, so they may be getting in on the act too.

10.   rbj
9 Thanks. And they've been doing it in Toledo for a few years. Also have seen it in Columbia, SC and elsewhere the past few years.

11.   Schteeve
i always thought it was foot locker trying to cut down on overhead

12.   randym77
I never realized that was a NY thing. I thought everyone did it.

When I was a kid, it was often something bullies did to smaller kids.