No Laughing Matter
by Alex Belth 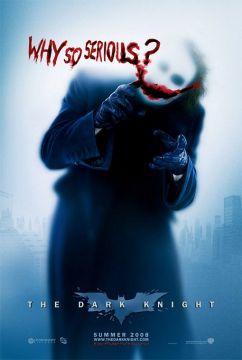 I remember dancing a lot during my senior prom. As it was getting late, and everyone was either too tired or too drunk to continue, the band, dropped their pants, revealing Batman boxer shorts and started playing the theme to the old "Batman" TV show. My dorky friends and I were the only ones left dancing. We stayed up all night and then went to see the first matinee showing of Tim Burton's Batman movie in the morning, its opening day. The movie, and Jack Nicholson's performance in particular, was enough to satisfy us--it wasn't a complete bomb--but it was still lacking. It didn't fully deliver on the promise of the comic book, it wasn't harsh enough, sinister enough, scary enough.

Well, the movie I wished for back then has now been made and it has been made well. The latest version is not only the ultimate Batman movie--pushing the violence and nihilism to the edge--it aims to be the ultimate comic book movie. The only thing is, I don't know if it's what I really want to see anymore. Leaving the new Batman movie, which is operatic, sweeping in its ambitions and length (at two-and-a-half hours, it is longer than any super hero movie should reasonably be, and yet it moves briskly), I was satisfied that a true Batman movie had finally been made. But I also felt a little bit dirty about it.

The new Batman doesn't leave you feeling elated or bubbly--it may leave you exhausted, or, more probably, unsettled. Each of the Joker's scenes is accompanied by an insistent sound effect, a buzz saw that starts softly and gets progressively louder, that is particularly unnerving.

This is as far from a Happy Meal Super Hero as you can get--it is a graphic novel, closer to a horror film, or a tense thriller, than it is to the usual popcorn action movie. It is ominous, serious-minded and dark, like "Fight Club," or "Seven." The movie does have a sense of humor, a dry sense of humor, especially in the Bruce Wayne scenes. But there isn't a lot of gleeful madness to Heath Ledger's Joker, which is what made Ceasar Romero so creepy and effective in the role.

The Joker here is all madness--and Ledger wisely roots his performance in a natural approach--without much goulish fun. I think Ledger is good but not great. I think the conception of the Joker in this movie is great which goes a long way is setting the stage for his performance, which is excellent. But I also feel that other actors, say Robert Downey Jr or John Leguizano, would be equally as effective in this particular conception of the Joker. I really like the flatness of Ledger's accent though. The insanity is there with Ledger--the only tick that distracted me was his habit of licking his lips, something that is more prevelant in the second half of the movie.

The screenplay is dense but I think it works, and the supporting cast is excellent--Michael Caine is an ideal Alfred, Gary Oldman is winning in an under-stated turn as Jim Gordon. Aaron Eckhart is strong as well. I think the movie achieves what it set out to do--it may be turgid but it is also accomplished. It's ill, it's sick, twisted, it's all of that.

Comic book movies are all grown up. In the Wall Street Journal, Allen Barra wonders if that is such a good thing. In The New Yoker, David Denby writes:

Warner Bros. has continued to drain the poetry, fantasy, and comedy out of Tim Burton's original conception for "Batman" (1989), completing the job of coarsening the material into hyperviolent summer action spectacle. Yet "The Dark Knight" is hardly routine—it has a kicky sadism in scene after scene, which keeps you on edge and sends you out onto the street with post-movie stress disorder. And it has one startling and artful element: the sinister and frightening performance of the late Heath Ledger as the psychopathic murderer the Joker. That part of the movie is upsetting to watch, and, in retrospect, both painful and stirring to think about.

Relentless, uncompromising--satisfying, but not much fun. A very dark Knight indeed.

Comments
1.   Alex Belth
I don't remember what the most violent video game was back in 1989, but The Dark Knight is the perfect comic movie for the Grand Theft Auto generation.

I don't know if I can say that I liked the movie but I'll say this---I'd go see it again.

2.   liam
ill tell you alex. the most violent game back then was probably splatterhouse. i dont think anyone ever had a turbo-grafix 16 machine, but that was the one. there was also some game on genesis that parents were raging about but i cant remember the name of it.

from the nintendo side, id have to say the video game version of ninja turtles or ninja gaiden. far cry from grand theft auto eh?

3.   Simone
I enjoyed the movie, but to the end I thought they tried to do too much by introducing and wrapping up Two Face who should have been the villain for the next movie. I also didn't like the sense that they were subtly endorsing the Big Brother surveillance of the populace by people who can be "trusted."

Heath's portrayal of the Joker was menacing and scary as hell.

4.   QueenV
I just saw Dark Knight and was totally reminded of Grand Theft Auto... the whole truck chase scene with bazookas felt like something I've done in a GTA mission, which excited me.

But yes, what an extremely dark movie. I was shocked it wasn't rated R. I feel like it was far too mature for a kid to enjoy, with all the themes on terrorism, ethical dilemmas, individual rights vs. the greater good. I don't think a Batman like this would've been made pre-9/11.

I'm a big fan of the Tim Burton movies. The musical scores were genius, and the movies had a dark, gothic quality while still retaining a bit of whimsical fun. Loved the Animated Series too... great stories.

5.   claybeez
The Nolan Brothers' movies present a Batman and a Gotham city, replete with real villains, that I wished for after reading the graphic novels in college. The darkness, the wretchedness that this Batman must combat is so much more terrifying, because it is so much more relatable.

I remember going to see Burton's Batman after a day at the Reggae Sunfest. When the concert was over the majority of the crowd rushed en masse to the, then, only movie theater of that particular suburban sprawl. It seemed like the perfect day to us, the high schoolers and collegians, who had basked in uplifting and revolutionary music by day and yearned for spookiness by night.

Halfway through the movie, a like percentage of the audience was asleep - some snoring. Perhaps it was too much sun or one too many spliffs, but there was no avoiding the fact that the movie was a disappointment. Watching a campy Nicholson prance around to an equally campy Prince track was not the kind of fiendishness many had in mind.

That is why I delight in the breaking of the formula that always had buffoonery as part of the equation. As comic book movies have continued to multiply, that sort of light fare can be easily found summer after summer. Batman now serves as the yin of a genre that offers plenty off explosions and fluff for today's kids. The Nolans' vision offers something for the kid that once was and the adult that is.

6.   Bagel Boy
The Joker licking his lips, I thought, was his only clear nervous habit and arises directly from trying to clean his facial wounds - an attempt to heal himself. Think about it: If you had your lips split open that way, whatever the cause, wouldn't you keeping licking them?