Time To Make the Donuts
by Alex Belth 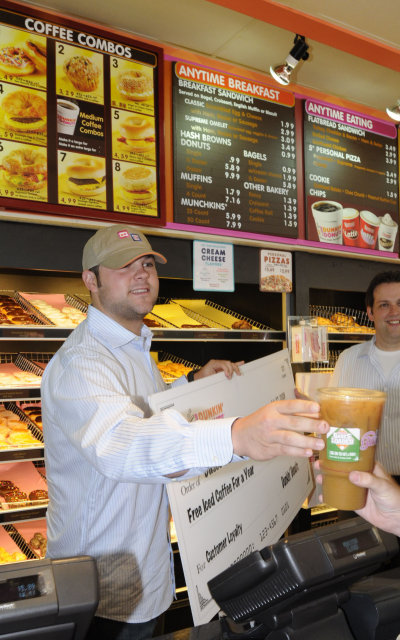 Joba Chamberlain popped up in a few Dunkin Donuts around town today.  It'd be fun to run into that kid on the street, don't you think?

For all of the things that have gone wrong this season, Mr. Joba sure ain't one of 'em.

Comments
1.   tommyl
Man, that Friday night game in Fenway could be great if both pitchers bring their A-games.

3.   rbj
Just hope he doesn't get hurt be being between Ponson and doughnuts.

4.   Sliced Bread
Too damn funny seeing Joba pushin donuts. Before carpooling into NY at 6am this morning, with a buddy from my old town, I stopped at the Dunkin' F'in Donuts to get us some coffees for the ride.
In my pre-caffeinated haze, I considered stealing a nearly life-size (Pedroia sized?) cardboard likeness of Joba standing by the backdoor. I even looked over my shoulder, medium black coffees in hand, and assessed the risk of running to my car with the coffees and the big cardboard Joba.
Back in the day I probably would have bolted with that sucker, but the more mature, paranoid, and slower me decided the big cardboard Joba wouldn't be worth the hassle of possibly (even if unlikely) getting pinched by the Dunkin' employees. I even considered the possibility of there being a security camera in the parking lot, and I didn't want to be the 42 year old married father of three caught on camera stealing Joba.

5.   Gagne55
This reminds me of the episode of Seinfeld when Kramer saw Joe Dimaggio at the donut shop.

6.   Shaun P
I wonder what the Dunkin Donut loving masses of New England would think about this?

In other news - Steven Goldman has the solution to the Yanks' catcher woes: just activate Girardi!

i wonder if moose was jealous.

4 if said situation happens on your way home - i'm sure you can hit up the banter fund.

9.   tommyl
6 Well he did catch Rivera's warm up in the pen for the ASG. It'd never happen, but it would be one of the more entertaining things I can think of. If only we had Mattingly to activate as a first basemen.

11.   tommyl
10 BTW, I know everyone calls him ChoMo, but I prefer to call Moeller the "Chemistry Teacher" because he looks like a 9th grade Chemistry teacher to me.

13.   nick
wow, the sheer averageness of our lineup depresses....I had to take a quick glance at the 1990 lineup on bb-ref to calm myself down!

15.   rsmith51
14 The top 6 are pretty good as long as Cano, Jeter and Abreu are near their career averages.

Melky and Brett need to get up to replacement level.

16.   Eirias
Let's make this clear, because I has always been a funny question in my mind: There is no way the coaching staff is allowed to participate in games, no?

17.   Eirias
Oh, and whoever said "I miss Bowa" regard to Pinwheels, LAD has only had three fewer runners thrown out at home this year.

18.   Max
One of the things I hate about living in New England is the prevalence of Dunkin Donuts -- horrible food and coffee. The fact that so many Massholes with backward Red Sox caps swear by the chain only makes me hate it more.

19.   RIYank
18 The density in Rhode Island is probably double what it is in Mass, Max.

20.   RIYank
I see Joba is out front serving, which makes sense. But I'm still very worried about who will make the donuts now that they've moved him out to deal with the customers. I really don't want Kyle doing that job, for instance.

21.   SF Yanks
There's a new thread up for anyone lingering.

23.   Chyll Will
18 I don't see how New England, in regards to Old England, is all that new anyway... despite dueling theories on taxes and good tea...

25.   Jen
6 Papelbon is also doing the DD promotion. If you put in one of the codes you can "bat" against him or Joba.