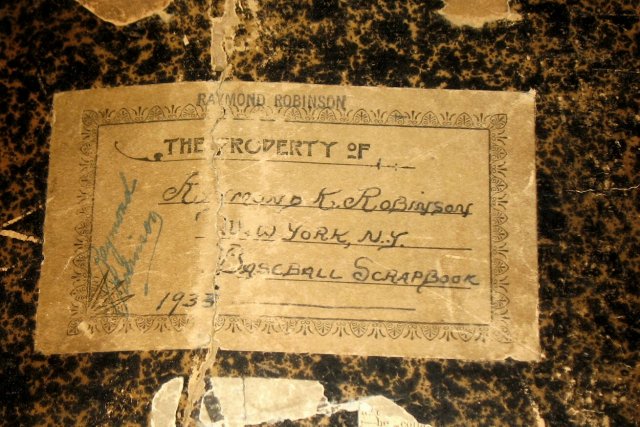 A few months ago I invited myself to Ray Robinson's apartment, ostensibly to get his list of ten essential baseball books, but really so I could lay eyes on his library of sports books.  Robinson, an author (Iron Horse) and longtime magazine editor, grew up on the Upper West Side, near Columbia.  When he was a kid, Robinson got a delivery job at a local liquor store, and he found himself making stops over at Babe Ruth's apartment at 110 Riverside Drive. He'd say, 'Thanks keed,'" Ray told me.  "He called everybody 'keeed,' because he couldn't remember anyone's name.  And he would invariably honor me with a couple of dollar bills."

Ray and his wife, Phyliss were wonderful with me.  We chatted in the living room of their comfortable New York apartment for about an hour and Ray shared his selections of favorite baseball books with me.  I poked my nose through his collection and as I was about to leave, Ray said, "Oh, would you like to see my scrapbooks?"

Ray picked-up a bright orange plastic bag from the bottom of the bookshelf, the kind you'd get from the local Chinese take out.  He pulled out two weathered books, practically falling apart, one dated 1932, the other, 1933.  They were filled with pictures of players from every team in baseball.  Ray cut-out images mostly from The New York Sun, The Saturday Evening Post, assorted baseball magazines as well as baseball cards.  Then, along with some friends, he'd scout the hotel lobbies where the out-of-town teams stayed, to get autographs. 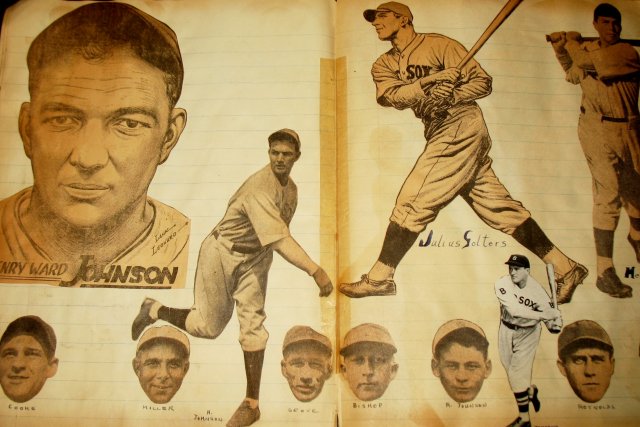 The books are lovingly, obsessively assembled, filled with small notations.  Ray expressed some embarrassment when I complemented him on how wonderful, how personal the books are. He dismissed his sketch of the Babe as being awful, but I liked it and his wife did too.

Ray asked if he should sell the books--after all, he's got a couple of Lefty Groves in there, a Honus Wagner, Dizzy Dean.  Phyliss said that she didn't think that was a good idea. I quickly agreed.

"You can't sell these," I said.  "They belong in a museum or for your grandkids."

As I looked carefully through the two books, Ray kept wondering if he should sell them.  I said, "No way," but when I left I felt foolish.  Who am I to say that he shouldn't sell them?  There is probably some serious money in those two books.  Still, they feel too personal to part with.  They are not kept under a glass case, they are in a plastic bag on the shelf, a secret baseball treasure on the Upper East Side.

Yesterday, the New York Times featured a short essay by Ray Robinson about his scrapbooks.

Check it out and dig what I was able to see: 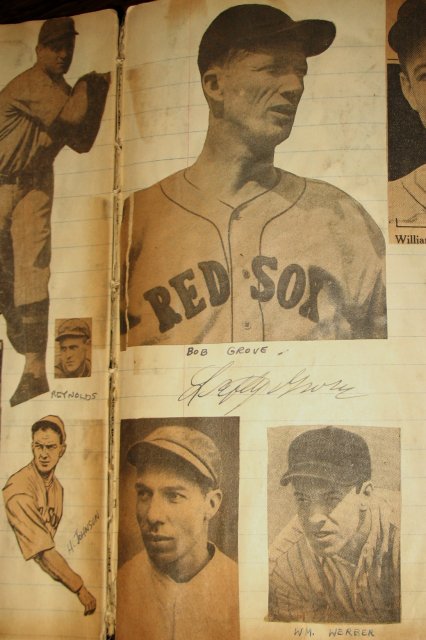 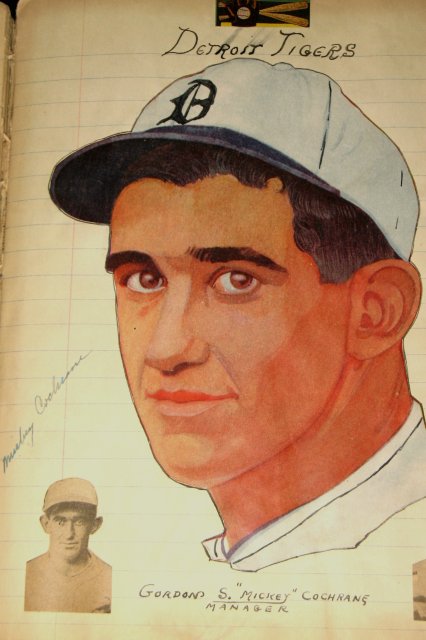 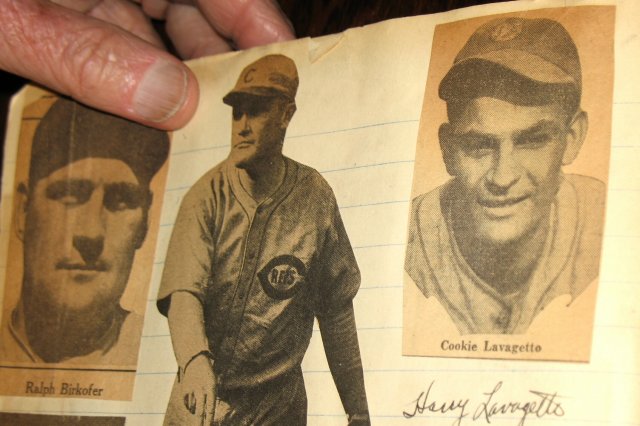 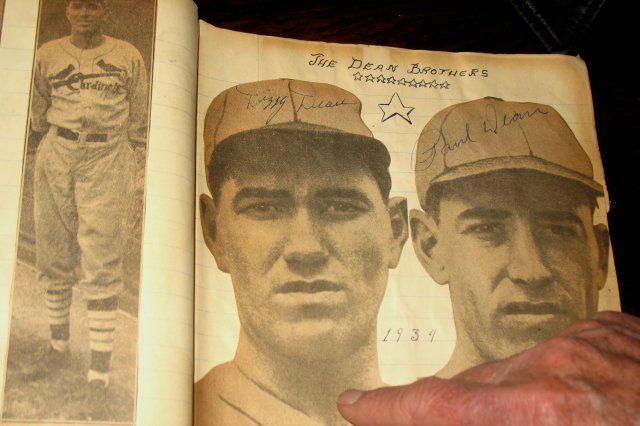 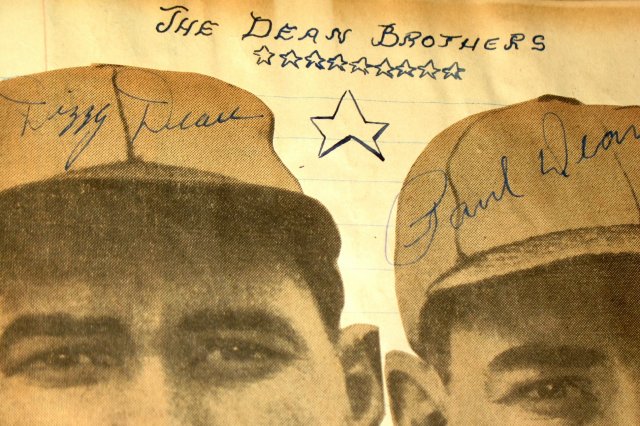 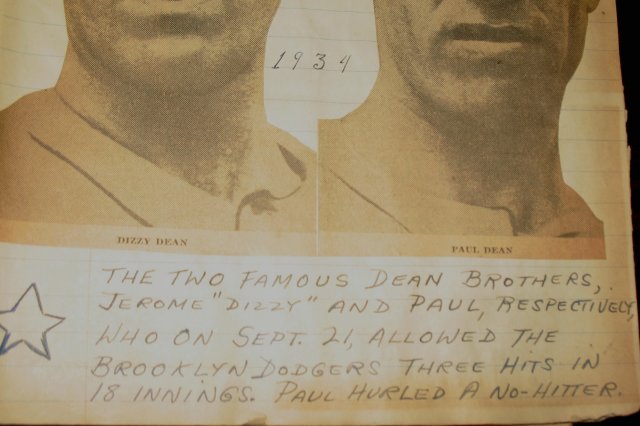 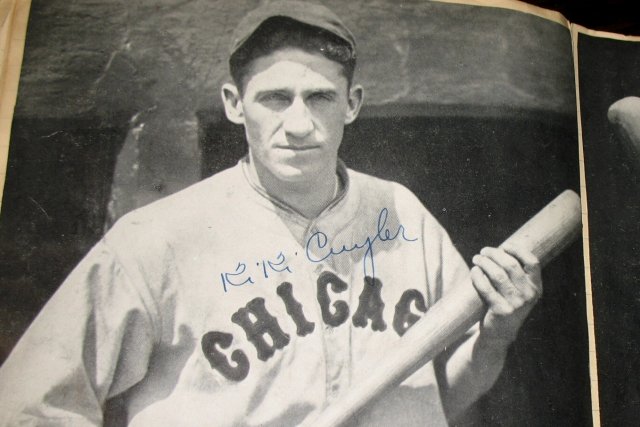 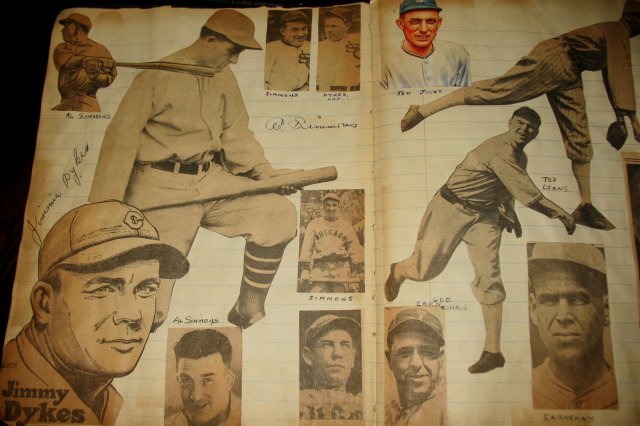 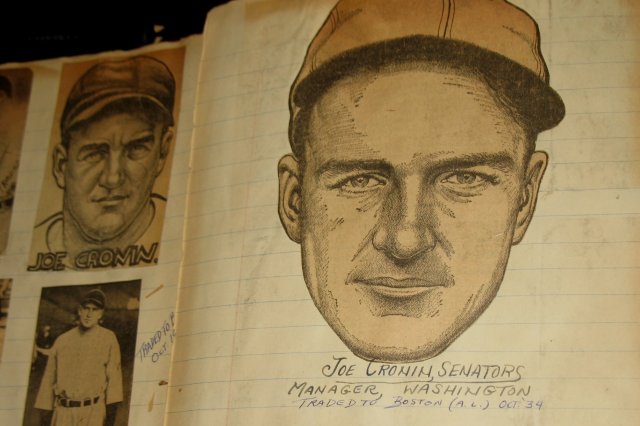 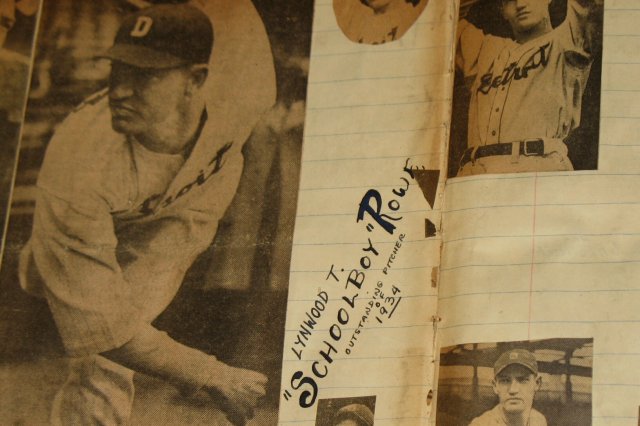 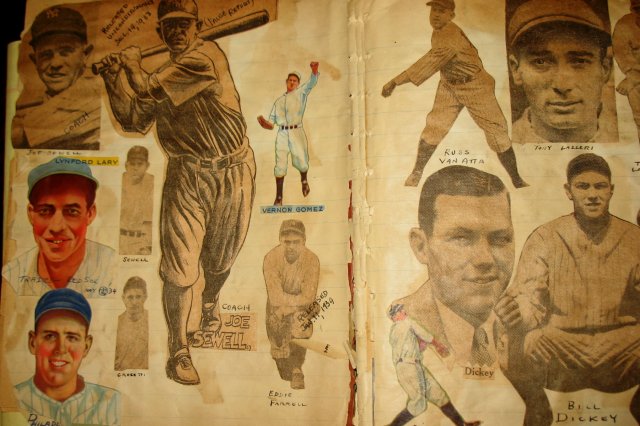 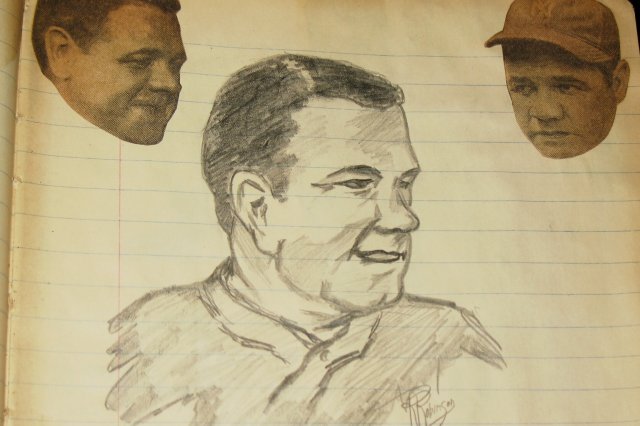 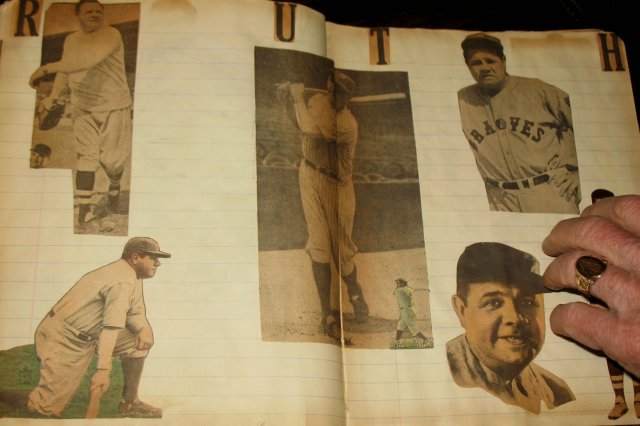 How cool is this?

"There was one anecdote -- I will not use the name of the person -- that gives some insight. About eight or nine years ago, when Joe was visiting New York on a summer evening, he told a very close friend that he hadn't had a good Italian meal in a long time. "Do you know any good places?" he asked. And the friend did, it was some place down in the East Village. It was a very satisfactory meal, after which his friend, of course, paid for it. He was very reluctant to pick up tabs. Then when they walked outside into the heat of the summer night, Joe said, 'You know, I haven't had a good ice cream cone in a long time." So they went into an ice cream place around the corner and immediately, of course, the guy behind the counter said, "What'll you have, Mr. DiMaggio?" And DiMaggio said, "I'll have the best thing you have with all the trimmings." And this guy presented him with this magnificent ice cream cone with all sorts of stuff on it. And Joe said, "How much is it?" And the guy said, "Five dollars." And Joe said, "Take it back."

I imagine he was a very lonely guy, even though he was always treated like a potentate. He was almost like a head of state. I think he was very cognizant of the fact that he was one of the first Italian heroes and he wanted to behave properly in every way, including how he looked and how he appeared on the ballfield. DiMaggio was silky, elegant. I can see him now. He always looked good on a ball field."

2.   williamnyy23
The photos are fascinating...and the Ruth sketch is pretty good, even if it looks more like Joba.

3.   bobtaco
My grandfather is a big autograph hunter now, and he always talks with some regret about how many people he met and could have had signed for him. This would really make him happy and jealous I bet.

Also, how can you put a price on these books? They are one of a kind.

4.   Cliff Corcoran
Did you just order a five-dollar shake?

A shake? Milk and ice cream?

You don't put bourbon in it or anything?

Remarkable stuff above, Alex. You'd told me about it and it's a joy to finally see the photos.

I always get a buzz out of seeing obsessive stuff like this, because I treasure memories and am a pack rat, but I'm just not wired to put together mementos in this way...all the connections swirl around in my head and stay stuck there.

I had a friend when I was growing up that did this same sort of scrapbooking, but for his fave basketball teams and players instead...I was insanely jealous of his creativity.

6.   Alex Belth
Thanks, Cliff and co. I only got a couple of rushed minutes to take pictures, with a so-so camera. The beauty part is that Ray is such a gentleman. What a terrific guy.

7.   pistolpete
My grandfather and Mr. Robinson must have been cut from the same cloth, because I have 2 similar scrapbooks in my possession that contain a ton of clippings from around that era as well.

One is basically articles & photos from the entire 1936 World Series, Yanks vs. NY Giants.

They're both extremely fragile, and I'm wondering what I should do with them myself. Is there someplace that might help me preserve them somehow?

8.   standuptriple
Awesome! I've gathered a few autographs over the years. Some significant, others quite boring to others. I cherrish them all.
Side note: I met Jeff Marquez' uncle on the 4th (he brought some very nice Anejo tequilla to the in-laws). Maybe I'll get one from him in the not-too-distant future to add to the collection.

9.   Raf
7 The Baseball Hall of Fame may be interested.

Also, apropos to the previous post: my brother has a set of two or three seats from the old Yankee Stadium. My dad bought them some five years after the Stadium closed down for renovations. He found them at some architectural salvage place in Connecticut, nothing special, and they didn't cost much.

11.   RIYank
Sorry this is off-topic. If I knew there would be a more 'current baseball events' thread soon, I'd save it.

RLYB has an ongoing series listing players by position, ordered according to total runs produced + runs prevented. (They use pBRAA and RSAA).
Here's an unsurprising one: A-Rod tops the list of 3Bs (by a mile). He's actually -1 defensively, but, turns out the guy hits real well.

Here's another unsurprising one: Posada is dead average, with -4 on defense and +4 on offense. Molina is +5 on D, but a dreadful -9 on O.

Now the surprise: Jeter is +2 on defense! He's prevented 2 runs this year compared to the average SS. He's also +7 on offense, ranking third on the overall list. (Michael Young is first on the strength of his offense and Orlando Cabrera is second with nice balance, but Jeter is not far behind them.)