Boogie Down, Beat Down
by Alex Belth

The Red Sox stepped all over the Yankees again today, 6-4.  This one featured a rain delay to sustain the misery for Yankee fans. Alex Rodriguez got to Josh Beckett in the first, lashing a two-run double into the left field corner, but grounded out as the go-ahead run with the bases loaded in the seventh.  He didn't have much help around him either as the Yanks only got six hits.

They couldn't hold a 3-0 lead.  Kevin Youkilis tied it in the third when he hit a long fly ball to left field.  Johnny Damon tracked the ball and jumped up to catch it as he reached the wall.  The ball popped out of his glove and momentarily rested on top of wall.  Then, like one of those miracle putts that find a way to fall (Caddyshack), the ball dropped off the wall and landed next to Damon on the ground.  The tying run scored and Youkilis was on third with a triple.  Damon left the game.  Two innings later, Mike Lowell cranked a three-run jack, enough to do the Yankees in.  Even an umpire's gift in the ninth didn't help much.

I think the Yankees are upset, I think they are mad, just like the Sox were upset and mad after being swept by Tampa. It's just that the Sox are a better overall team than the Yankees.  Ten years ago, the Yankees always seemed to take advantage of other teams' mistakes.  Now, the Yankees are the other team.  And the Sox are the defending World Champs.   Boston has been a brilliant reaction to the most recent Yankee Dynasty--they built a sleeker, more efficient version of the Yankees.

My cousins came over this afternoon.  We made these killer ribs in the oven from a Cook's Illustrated recipe--Lapsang Souchong black tea is used for smoke.  They brought over a black-eyed peas salad and I made a cous cous salad.  It was all simply delicious.  So at least the food, and the company, was good. 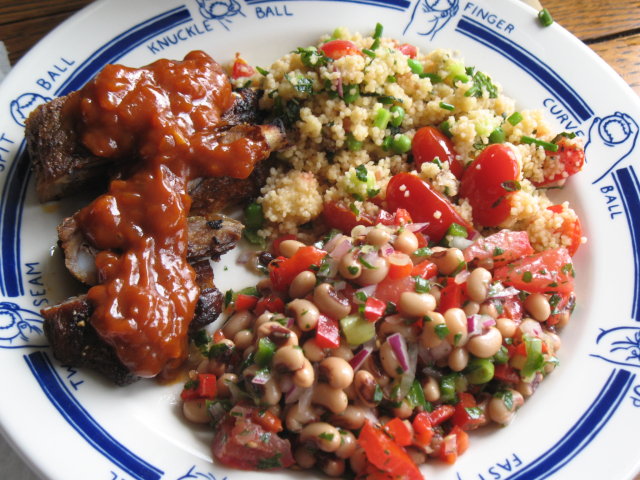 Comments
1.   williamnyy23
Glad you enjoyed a nice meal..being the glutton for punishment that I am, I went to this game and got treated to 7 hours of a team that looked like they'd rather be at a BBQ than playing the Red Sox.

3.   JL25and3
I think Alex is right; I don't think it's lack of desire. I think when a couple of key bats have off days, or off weeks, the Yankees just aren't a good enough team to pick up the slack.

4.   vockins
I took my kid to her first game today - too bad it couldn't be win, but we got this shot off which was worth the price of admission:

6.   Simone
The Yankees are just not good enough to compete with the Red Sox and Rays any more. They are a mediocre team.

Of course, we had ample opportunity to win. Once again, our suckitude with RISP costs us a game. They are all pressing, trying to do too much. Po swings at a 3-1 count... Cano first pitch swinging... ARod trying to pull an outside pitch and rolling over on it... Bobby popping up an absolute meatball.

If nothing else, they had a number of good ABs. They weren't bad, just 'unclutch'. We really need these next 2.

8.   OldYanksFan
According to PeteAbe: Damon out at least two games, likely more.

Actually, someone on Lohud said there are 6 degrees of 'strain' for what JD has. A fully separated shoulder is the worst, which I don't think JD has. He said however, that degrees 2,3,4 (not fully separated) will take at least 3 weeks before full range of motion is restored.

"I'm not sure how type these injuries last," Damon said. "It definitely doesn't feel good. I can't move it too well."

I think JD is headed to the DL for the first time in his career.

Wang, IPK, Phil and JD's injuries are not related to age. Matsui's yes. Maybe Po's and/or ARod's was.

Meanwhile, Mr. Fragile, the Big Lug, continues unscathed. How long can that last.

No doubt we have played poorly, but you can't ignor the injuries we've had.

9.   dianagramr
I wonder if Hank will chastise the wall for not having enough cushioning.

12.   Bob Timmermann
I now live in a world where people can say that the Yankees are not good enough to compete with Tampa Bay and it doesn't sound ludicrous.

13.   Raf
7 REgardless, those things did happen. Have been happening most of the season to date.

14.   monkeypants
Question for discussion: how shorthanded will the Yankees play this weekend? Damon finally to the DL, or do they limp through with three catchers and usable bench of only Wilson Betemit?