Diggin in the Crates Vol 2
by Alex Belth 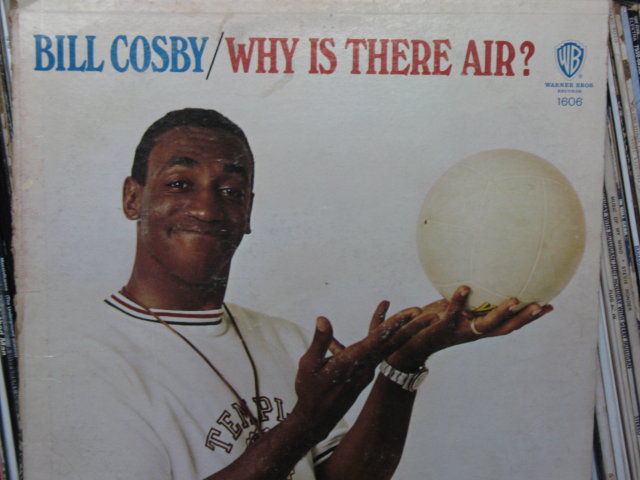 I always wanted an older sybling as a kid.  That wss the best way to learn about cool music, or so it seemed to me.  My parents had a decent-sized record collection but my father did not like Rock n Roll.  He was always too grown for that.  My mom did, however,  she didn't buy many albums, so the hardest-rockin records we owned were Simon and Garfunkel, Judy Collins and A Hard Day's Night (and the only reason we had that was because Dad was friends with one of the actors in the movie).  Most of the vinyl in our house was comprised of original cast recordings--My Fair Lady, Oklahoma, The King and I, West Side Story, A Chorus Line.  My twin sister became an avid fan of the Musical Theater, while I...did not.

There were a handful of comedy records however (Tom Leherer, Peter Sellers, Mel Brooks and Carl Reiner), none more enticing than this one, Bill Cosby's third album, released in 1965.  First of all, there is cover, with a young Cosby, the most amiable-looking of guys.  Two, the title fascinated me.  I mean, when you are seven-years old there aren't many deeper philosophical questions than the simple ones--"Yeah, why is there air anyway?"  (One of the other Cosby records we had, I Started Out as a Child, struck me as being very deep too.)

Above all, there was Cosby's material, instantly accessible and appealing.  The man simply sounded funny.  He made my father laugh and that was a big deal.  At a time when my father was often sullen, his moods increasingly dark due to too much drink, listening to him laugh was a thrill.  It was exciting to see him happy, if only for a moment.  My father laughed from the gut--it was an almost violent reaction.  He laughed loudly and his face would turn red.  I remember being both charged-up by the force of his laughter and also frightened.  Mostly, I recall sharing something with him.  Being connected by laughter.  If he thought Cosby was funny, it was okay for me to laugh as well.  To this day, when I listen to this record, I can tell you where my dad laughed.

Here is one routine from the album.  Enjoy.

Comments
1.   Shaun P
I haven't listened to any of Cosby's comedy stuff, except one show from 1983(?) that HBO replays some times. I loved "The Cobsy Show" though; it always made everyone in my house laugh out loud. Even my mother, who, to this day, does not understand why Cheers, Taxi, the Simpsons, Seinfeld, Frasier, etc. were/are soooo damn funny.

Now, as a parent myself, I enjoy "The Cosby Show" in a whole different way. I guess I ought to check out Cosby's early stuff too. Thanks, Alex.

3.   Cliff Corcoran
1 that one show you refer to is "Bill Cosby: Himself," which for my money is one of the greatest standup performances of all time (even if Cos does sit through most of it). The first season, if not the first two, of the Cosby Show was almost entirely based on his routines from that special. I'd own Bill Cosby Himself on DVD if it' weren't for the fact that I can still recite almost all of it verbatim.

4.   Jon Weisman
I listened to Cosby endlessly as a kid. Memorized his routines. I had a big collection of tapes of his that were lost when our basement flooded during the Northridge earthquake.

5.   Shaun P
3 Ah ha - that's the one! Its similarity to the first two years of the The Cosby Show might explain why I enjoyed "Himself" so much.

My favorite part is when he talks about dentists, which is on YouTube:

When searching I also found his Noah's Ark routine (from "A Very Funny Fellow" wikipedia tells me). I totally forgot about this skit! One of the nuns who taught me in elementary school played this for my class; the principal (the head nun) later gave her a bit of hell for it, and told her that "the classroom is no place for modern comedy." Ah, Catholic elementary school . . . good times!

6.   Alex Belth
Cliff, those are his first two that you picked up. Great football toss bit, Noah, etc. I think his best early period record is "Wonderfullness" though my favorit is probably "To My Brother Russell, Whom I Sletp With," half of which is devoted to one long routine about sleeping in bed with his brother.

7.   Alex Belth
I saw Cosby live during the "Himself" tour, which, as Cliff noted, was the premise for his show. That show is also notable for one of the few off-color jokes Cos ever told, and it's a good one...

8.   cult of basebaal
dad is great, give us the chocolate cake!

9.   Alex Belth
Another one of my favorites is hard-to-find..."Disco Bill," the only one of his singing records that I liked even a little bit. It's not great, but does include the minor classics, "Don't Boogie on My Face," and "What You Think About Lickin' My Chicken?"

10.   domvjr
Woody Allen's double album of his stand up, and Robert Klein's "Child of the 50's" are two of my favorite comedy lp's. You really don't hear much of Woody's stand up days, but if you can find this record out there, I would highly recommend it.
Being a child of the 50's Kleins bits resonate with some of my childhood experience. Only I didn't grow up in the City!

11.   Cliff Corcoran
6 Yeah, I know. I had "Russell" already and had been on the lookout for the others. I still need Wonderfulness and I Started Out as a Child.

9 I always like his version of Stevie Wonder's "Uptight"

Oh man, the Woody double lp (subject for another installment of ditc) was a bible for me growing up, some of the Wood Man's best stuff.

13.   Rob Middletown CT
""Bill Cosby: Himself" is absolutely hysterical, and all the more impressive b/c he's so clean about it.

I'm no moral crusader on this - I liked Carlin too and I swear like a sailor. But I think it's cool that Bill can be so funny without profanity. Skills, man.

14.   pistolpete
My favorite Cosby records, in order (parents had a big crate full of em', what a treasure trove for a 10 year old):

1.) Wonderfulness (must have listened to 'Chicken Heart' 200 times in a year's time)
2.) Bill Cosby Is a Very Funny Fellow...Right! (Loved the setup on 'Superman' and 'Pep Talk')
3.) I Started out as a Child (check out 'Ralph Jameson' - very unconventional Cosby track)
4.) Why is There Air? (Never knew what Midol was at the time, but 'The Toothache' was still hysterical)
5.) Revenge (Junior Baaaahhhhhrrnnness....you gunky!)
6.) To Russell... (the title track could have been my brother and I growing up)
7.) Himself (everyone knows this one, and maybe it doesn't rank higher for me because I'd seen the HBO special so many times I got burned out on it)
8.) My Father Confused Me... (actually has the 'Dentist' and 'Dudes on Dope' routines that were made more famous by the 'Himself' special.
9.) 200mph (another long title track, classic Cosby build-up)
10.) It's True! It's True! (great track - 'Mr. Ike' - about life in the early days of television)

I have about 4 or 5 more (some had to be downloaded for lack of availability), but a lot of it is retreads/reworkings of the older stuff. "Oh Baby" was really the last true comedy album (1991), nothing really memorable save for the skiing routine.

15.   yankster
I don't know how or why since I wasn't born when most of the early Cosby came out, and I certainly never had a tape of it, but Cosby was THE defining source of wisdom for me growing up. I also know many of these routines by heart, which is why I'm surprised that while listening to the youtube selection, I just managed to laugh so hard that I blew my green tea and oreos through my nose - which sucks, cause I'm not 12 anymore - I'm at serious suit-wearing work and my keyboard is now funked up.