The Professional
by Alex Belth

Eliot was one of the great characters in baseball. --Jim Bouton 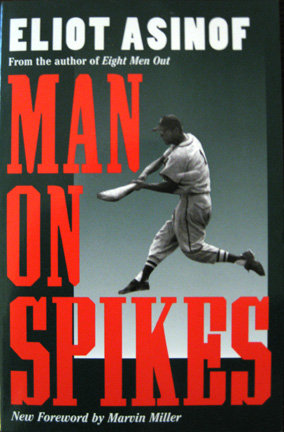 Eliot Asinof, the accomplished author most famous in baseball circles for Eight Men Out, his classic narrative of the 1919 Black Sox Scandal, passed away yesterday at the age of 88. Asinof enjoyed a long, varied career, that saw him through the dark days of the blacklist, and later found him flourishing as a screen writer, journalist--he was a frequent contributor to the New York Times magazine in the late '60s and also wrote for Sports Illustrated--and author (he wrote about civil rights in Bed Stuy, Brooklyn, the television industry as well as many novels).

One of his novels, The Fox is Crazy Too, about a con man/master criminal who pretends to be insane to escape responsibility for his crimes, was found alongside a handful of books and a postcard addressed to Jodie Foster in John Hinckley Jr's hotel room the day Hinckley shot President Ronald Reagan. Asinof was once married to Jocelyn Brando, Marlon's sister, and he also dated Rita Moreno.

This morning, I received the following e-mail from Roger Kahn:

Eliot was a fine and gifted friend, with a remarkable work ethic and an enduring anger at what he perceived to be injustice. Aside from his writing, quite an aside, he was a good ball player, a good carpenter, a good chef, and an excellent pianist.

He was an Army lieutenant during World War II, sent to lead a platoon on Adak Island. Since a Japanese invasion of the Aleutians seemed imminent, this was not exactly a plum assignment. "You'll love it on Adak," his colonel told him. "There's a beautiful woman behind every tree."

As Eliot told me more than once, "When I got there, I found there are no trees on Adak Island."

Ralph Blumenfeld, writing in the New York Post, once described Asinof as "balding and muscular, a cross between Ben Hogan and Leo Durocher on looks." After graduating from Swarthmore college in 1940, Asinof played in the Phillies farm system for a few years before being drafted. "My bonus was a box of cigars," Asnioff told Blumenfeld, "and I didn't smoke."

In 1955, Asinof published a baseball novel, "Man on Spikes," roughly based on the career of a friend as well as his own stint in pro ball. In a recent e-mail, John Schulian told me:

You could smell the sweat of honest labor on Asinof's work.  If you've read "Eight Men Out," you know what I mean.  But there's something about "Man on Spikes" that touches me even more profoundly, for here was a guy who'd kicked around in the bushes describing just how back-breaking and heartbreaking that life can be.  I never met Asinof, but I like to think that he carried what baseball taught him to his grave.

Eliot Asinof, in giving his reasons for writing "Man on Spikes," says, "The folklore and flavor of baseball fascinated me then [when he was playing ball in the Philadelphia Phillies' farm system, some years ago], and it still does today." That sounds a little ominous; but Mr. Asinof, I'm gald to say, has not let his sense of the game's folk-meaning involve him in a Bunyaneque or a comic-Faustian or a dream-symbol treatment of baseball. "Man on Spikes" is a plain and honest book, the first realistic baseball novel I can remember having read."

Years later, in a piece on the All-Star team of baseball fiction, Daniel Okrent wrote (also in the Times):

In print for about an hour and a half in the middle 50s, Asinof's book is about a young man of endeniable talent, whose career is thwarted and eventually destroyed by the arrogance of the men who ran baseball back then, and the servitude players were forced to live in. It is a harsh book, unsettling and, finally, depressing. It is also perhaps the truest baseball novel ever written.

At the end of the 1967 season, Asinof wrote about baseball's diminishing popularity:

The New York football Giants draw more to a single summer exhibition than the New York basball Yankees in a week of regular season games.

Baseball no longer grabs the young and it has alienated many of the old. It moves too slowly for a speed-conscious, action-hungry society. With the rising emphasis on home runs, there are too few base runners and even fewer who know how to run the bases.

"Only long-ball hitters drive Cadillacs," they say, but the end result seems to be that the average wing in hockey is driving a better car than the clean-up hitter who seldom averages over .250. The tradition of great ball clubs in historic relationships with their communities--like Connie Mack with the Philadelphia A's--has all but dissolved with the maddening city-jumping of money-hunry club owners.

The great American sport (remember, the Supreme Court says it's not a business) has become the desperate American hustle: a team that wins a flag in New York one year, say, may be shooting for another in San Francisco the next.

...It is inevitable that our affluence has changed our styles. The teenagers who used to gather at the sanlots now prefer guitars and sports cars. The sandlots themselves no longer exist, having been swalllowed up by the realty needs of expanding suburbs.

...For all its dwindling popularity, however, the World Series remains at the heart of the American sproting scene. There will be more than enough drama in the competition for anyone who wants it.

Despite the inevitable exhuastion of those four exciting American League contenders (a factor that may turn the Series into a rout for the St. Louis Cards), anything is likely to happen in the best four-out-of-seven games. Great athletes will put out with the best that is in them to give, spurred by the happy combination of pride and prize money.

Most of all, for baseball fans, Asinof will be remembered for Eight Men Out, which, after several failed attempts, was made into a pretty good movie by John Sayles.

Asinof was seminal. I think you can credit him as being one of a handful of writers* whose work (Eight Men Out, first published in 1963) made the case that baseball (and by extension, sports in general) was a worthy subject for serious historical inquiry and serious historical work, that baseball history need not be framed for children to be commercially successful, and that there was a market for this kind of work.

The fact that he dated Rita Moreno, was once married to Marlon Brando's sister and was blacklisted just makes him cooler.

* Harold and Dorothy Seymour, Al Stump, Ritter, Bob Creamer would all be on the short list of others, I think.

And from Richard Lally:

Eight Men Out was the first "adult" baseball book I ever read and Asinoff remains one of the more sober-minded writers on that subject. He masterfully portrayed several of the eight as sympathetic characters, while making their frailty abundantly evident. I came away convinced of the guilt of all of them, including Buck Weaver (the least culpable of the eight), and was always astonished when someone would, misguidedly in my view, take up the cudgels for Shoeless Joe Jackson, who at the very least was clearly guilty of aiding a conspiracy. Subsequent examination of Jackon's previously "lost" grand jury testimony confirms his guilt to anyone who has a pair of eyes and a discerning mind, and a perusal of the testimonies also reveals just how much Asinof got right. He was a probing journalist who made Eight Men Out as compelling as a novel, quite a feat for any writer.

Eight Men Out is a lasting achievement. But it is just one highlight in a memorable career. Rest in peace, Mr. Asinof.

For more great stuff on Asinoff, head directly to Jay Jaffe's wonderful write-up over at The Futility Infielder.